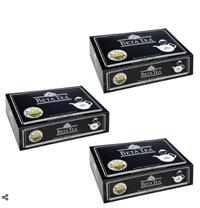 Black tea, collected and processed from the low-lying Ratnapura region of Sri Lanka, has the appearance of curled medium-length leaves. Ceylon tea leaves are blended with the nature-identical bergamot flavor to form Beta Earl Gray tea. Its non-dark brew color, bitter taste is both hard and soft, but this time it is the indispensable tea taste of flavored tea lovers. The citrus-like taste and smell of Earl Gray comes from the bergamot flavor it contains. . When brewed, it is a good example of its bright medium dark infusion color and the balanced hard and astringent taste of Sri Lankan tea character. Earl Gray tea is named after Earl Charles Gray. Earl Charles Gray was Prime Minister of England from 1830 to 1834 and is better known for naming the tea, although he abolished slavery during his reign.