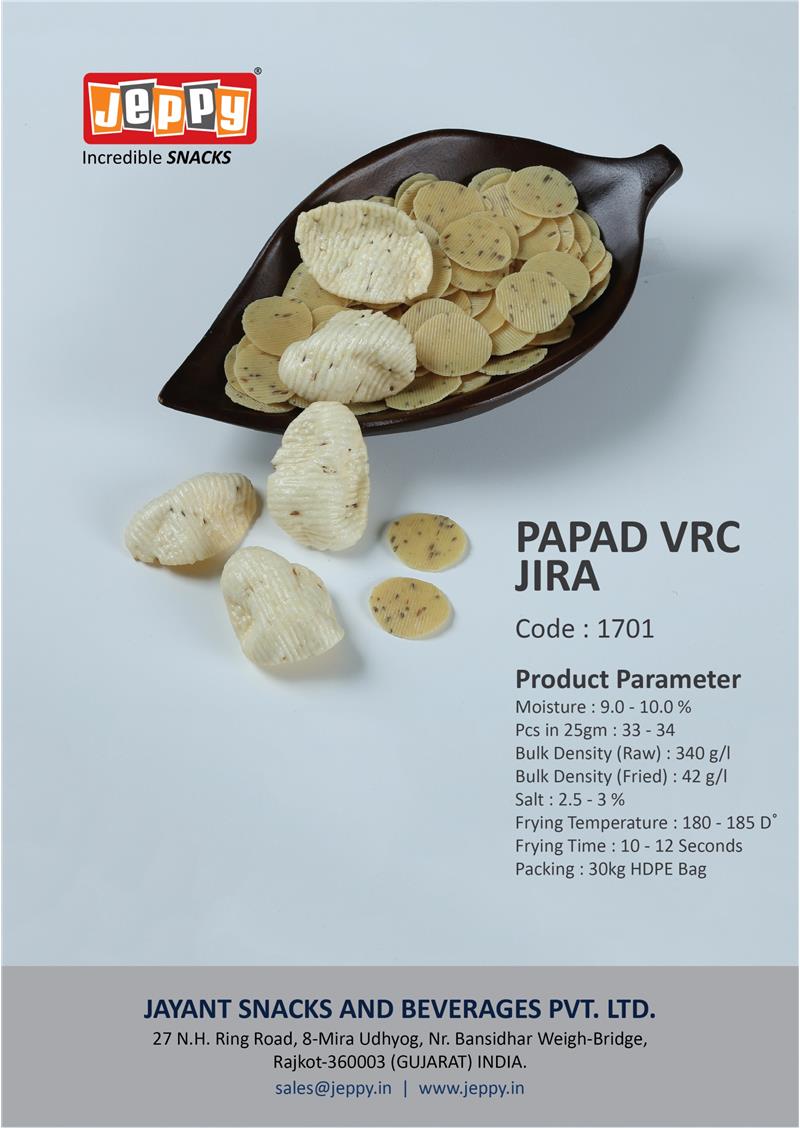 VRC27mm JEERA PAPAD : The initial purchase of raw materials is made in accordance with the product order that was received. Clean, dry, and ventilated storage areas are used to keep raw materials. A mixture of these ingredients is added to the tank for mixing the dough after the raw ingredients have been weighed in accordance with the recipe and sieved through screens. where the required moisture content, which is between 30 and 35 percent, is reached by adding water. It mixes for about 25 to 30 minutes. Prepared dough is fed into the cooking extruder using a force feeding screw. The temperature of a single screw cooking extruder is about 100 degrees. The cooked dough is then put through a die at a temperature of 90 degrees. The dough is cut into raw pellet balls based on the shape of the die, and these precooked balls are then fed into the feeder of a single screw former extruder. where temperatures is of about 70 degrees. The cooked dough then moves toward the die, which is of 90 degrees temp. The cooked dough is passes through a small die-shaped opening. cut to the desired size. After cutting, pellets are transported to the shaker using compressed air, residence time is of five minutes at 70 degrees. After that, pellets are fed into a pre-dryer to lower their moisture content, at an 80-degree temperature for 30 to 40 minutes. Following the pre-drying, pellets are further dried in the main dryer for around 6 hours at 80 degrees, resulting in a final moisture content of 7-8.5%. the pellets are then cooled to room temperature, which is around 25 and 30 degrees. Mechanical Sieve are used to remove any type of rejected pellet as well as Sorting personnel remove any damaged or uneven Pellet.
Loading
Loading
Loading
Loading
Loading