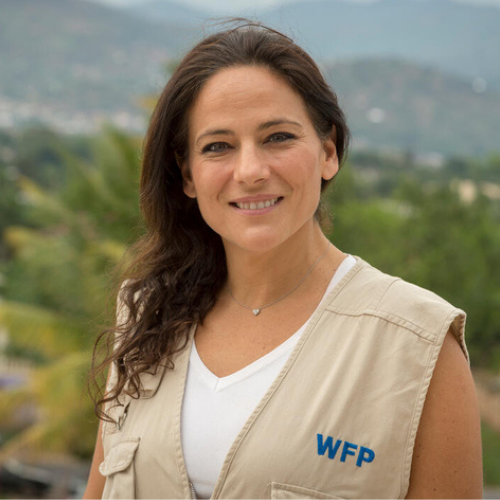 Virginia Villar Arribas is the Deputy Director of the Private Sector Partnerships Division at the World Food Programme (WFP), based in Rome, since November 2020. She joined from Burundi, where she had been Country Director and Representative of the World Food Programme from Dec 2017 to Nov 2020. She had previously worked as Head of the OCHA Office (Office for the Coordination of Humanitarian Affairs) in Burundi, after a humanitarian coordination posting in Afghanistan as Deputy Head of the OCHA Office, dealing among other with Field Operations, as well as Communication and Advocacy. Mrs. Villar had been UNRWA’s (UN Nations Agency supporting Palestine refugees in Syria, Lebanon, Jordan, West Bank and Gaza) Chief of Donor Relations (2014-2016), leading the Agency’s strategy, development and implementation of relations with donors and resource mobilization.

She had previously worked in the UNRWA Office in Lebanon, heading the Programme Support Office, supporting the planning, strategy and coordination of the Agency’s operations in the field (education, health, relief and social services, emergency). She led the development of a Mental Health and Psychosocial support strategy, as well as the mainstreaming of people with disabilities, gender and youth issues into the programmes.

From 2010- 2013, she was the UNRWA Liaison Officer with the European Union in Brussels. Before joining the United Nations and for a period of 10 years, Virginia Villar had worked in the European Union holding different capacities: Head of Operations of the EU mechanism for support to Palestinians (PEGASE) in the occupied Palestinian Territory, Geographical Coordination for the Near & Middle East (2006-2009); and Programme Manager for Twinning Operations (EU bilateral governmental cooperation in the areas of justice, energy, transport, border management and others) for Ukraine, Moldova, Azerbaijan, Georgia and Armenia (2005- 2006). From 2004-2005, Ms. Villar Arribas was responsible for EU assistance to Maghreb- Mashrek countries in the area of Justice, Liberty and Security. Previously, she had been posted at the EU delegation in Russia (2000-2004) first as Special Assistant to the Head of Delegation (dealing with communication, media, negotiations and protocol) and also as Finance Officer for EU development projects.

She worked as a Journalist in Spain and volunteered for five years for the Spanish NGO Solidarios in support to immigrants, prisoners and development projects in Africa and South America. She also collaborated with Médécins sans Frontières (AIDS Foundation East -West) and the Russian Association for People with Disability from 2000- 2004. She was a Member of the Board of Trustees of the Russian National Orchestra and the Rotary Club in Moscow. Virginia Villar is a Spanish national. She has a background in Journalism (Bachelor of Arts) having studied in Spain and The Netherlands and holds Masters in International Studies (Diplomatic Academy of Spain) and International Relations (Complutense University, Madrid) as well as post Graduate Studies in Political Science and International Relations (University of Ottawa, Canada). VIRGINIA VILLAR ARRIBAS, Deputy Director for Private Partnerships.